Editor’s note: readers will enjoy this guest post written by one of our Brazos Fellows, Kelsey Collister.

This August, I moved from the metro-Detroit area to Waco, Texas to join the Brazos Fellows at Christ Church. After working in the advertising industry for six years, I was exhausted from the transitions of life, job searching, navigating friend groups and trying to figure out where I belonged in the church. As Catholic social rights activist Dorothy Day put it, “we have all known the long loneliness, and we have found that the answer is community.” Sometimes the loneliness part is a little too close to home for twenty-somethings, though.

A month into the fellowship, I heard that Oliver O’Donovan, Professor Emeritus of Christian Theology at the University of Edinburgh, was speaking at Baylor University on the topic of “The Common Good.” So I biked across town and found a seat in back of Elliston Chapel.

Dr. O’Donovan explored two key questions in his lecture: “Whether and to what extent Christians should expect to find themselves uniting around a distinctive political program for the welfare of civil society as a whole?” and “Are there elements of a political direction, however broadly define to which Christians by virtue of their common faith in the kingdom of God might expect other Christians to subscribe?”

As Dr. O’Donovan explored these questions, he also gave me a new way of thinking about community. Most of us understand community on some basic level. We’ve caught glimpses of it in the mass, at an indie rock concert, or in our own niche friend group. For some, community is about uniting around a common interest, whether it be Texas blues, Christian ethics, college football or a social justice cause. But Dr. O’Donovan pointed to a deeper understanding of the common good in his lecture, arguing that it entails “Private interest situated within the common interest. ‘Mine’ has to find a context within ‘ours.’” In other words, according to Dr. O’Donovan, “community is generated by conceiving an interest in the interest other people have in what interests us.”

As we explored the philosophical notion of the common good, my mind turned to my current living situation in the Morningstar House, where I live with three other women from Christ Church. When I quit my programming job a few months ago, I got rid of my car. All of the sudden, my well-being was intimately tied up in the community I found myself in. People from Christ Church shared so much with me, from rides to and from the airport, to dinners with their family, to their time and knowledge. My notion of the good life—which had been largely about my own self sufficiency—was being turned upside down.

The night following Dr. O’Donovan’s lecture, the Brazos Fellows had the privilege of joining him and his wife, Dr. Joan Lockwood O’Donovan, at the home of Elizabeth and David Corey. The Corey’s home is situated atop a hill overlooking beautiful Cameron Park. Over a meal of Mediterranean food, I introduced myself to Dr. O’Donovan, who told me that Michigan was the official border between the United States and Canada. 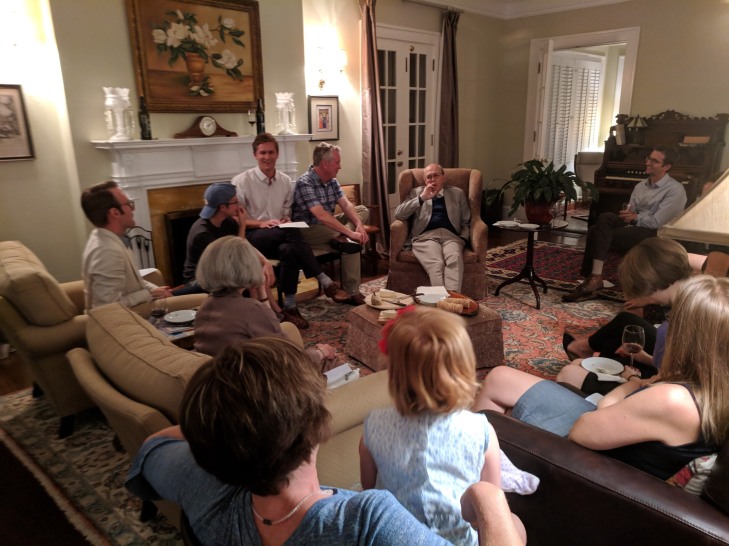 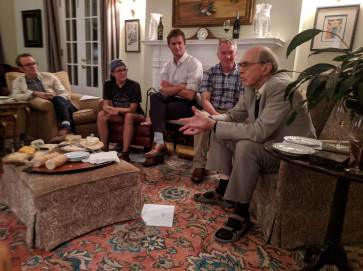 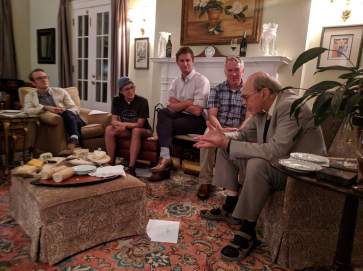 After dinner, we gathered in the living room for port, an assortment of fine cheese, and conversation. Everyone played a sort of intellectual ping pong with Dr. O’Donovan. When American politics came up, he said the United States was undergoing a “neurotic self-examination”—what I had been observing on social media for the last six years, he put into a single concise observation. When one fellow, Emily West, asked if American Christians could reasonably expect Christians to unite under a political program, Dr. O’Donovan replied, “we can’t expect anything from anyone—but we can pray.” What seemed like an abrupt response from a theologian who has spent so much time and research on the topic was refreshingly honest.

At the end of the evening, Paul Gutacker asked Dr. O’Donovan what advice he’d give the fellows in discerning their vocation. Dr. O’Donovan encouraged us to draw on the goods of the Anglican tradition. Perhaps this echoes what he wrote in his book Common Objects of Love: “We must become actual members of a real community constituted by the real and present image of mankind as subject uniquely to God. Jesus Christ, very God and very man, is the double representation around whom such a community has come into being.”

Kelsey Collister is from Detroit, MI. In addition to her interest in community, during her time as a Brazos Fellow she is exploring the topic of hope in modern and contemporary poetry.