Already it is Mid-February, and I am digging in my heels as the end of the fellows program looms on the horizon. Jesus’ question, “What are you seeking?” which he asks two of his disciples in the first chapter of John, has prompted me to refocus with these last few months of Brazos Fellows ahead.

We began in August asking the questions: Why devote nine months to the study of theology and church history? What is the purpose of this fellowship? Is it worth dedicating time and energy to this work?

The question of where to set our focus is not unique to Brazos Fellows. Life is ordered towards one thing or another, and we must all decide how to orient our lives. I fully expect to be on a lifelong journey of learning to focus and refocus my sight on God.

END_OF_DOCUMENT_TOKEN_TO_BE_REPLACED

This morning the Brazos Fellows started a new unit titled “Christianity and Modernity: Evangelicalism,” the first in a series of units in our class that help us understand how Christians responded in various ways to the questions and challenges posed by the modern era. We were joined by Dr. Tommy Kidd–my Doktorvater and an expert on early evangelical history. Dr. Kidd writes on American history, including books on religion in the American Revolution, a history of The Great Awakening, and, most recently, Who is an Evangelical? The History of a Movement in Crisis. We had a great time discussing a number of questions surrounding early evangelicalism: how much of a role did celebrity play in these revivals? What in early evangelical spirituality was traditional and what was new? How did early evangelicals relate to the church–and how did they approach questions of Christian unity? 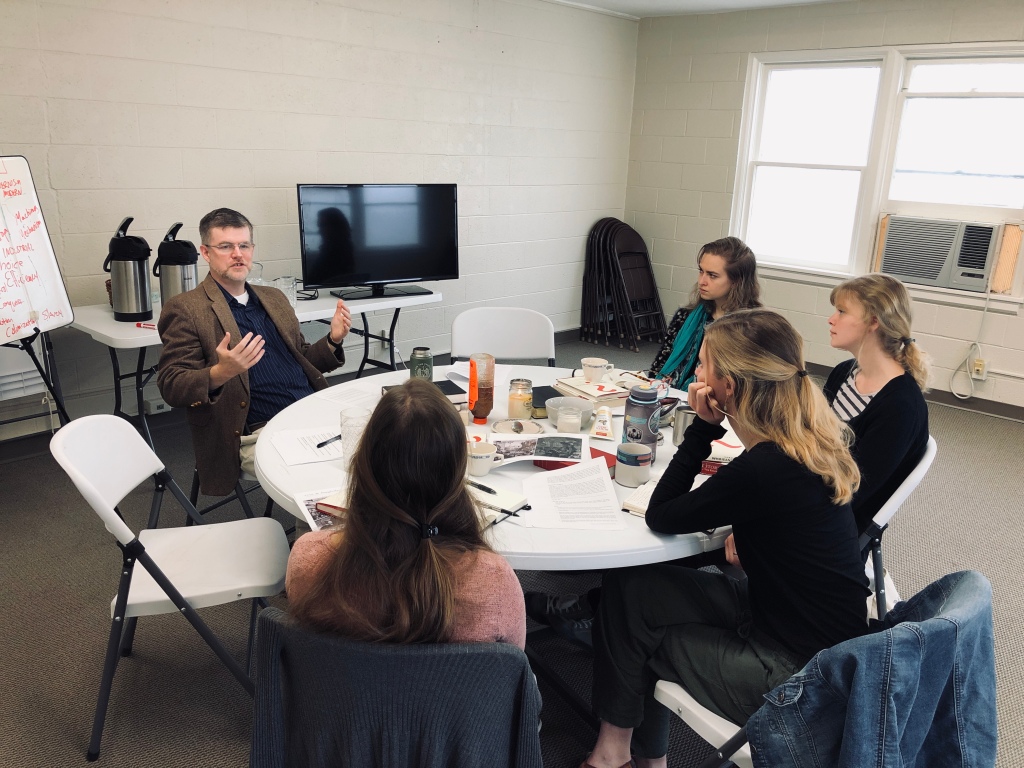 Tommy and I sat down for a round of “Five Questions in Ten Minutes,” and covered all sorts of topics: his favorite C.S. Lewis work, the merits of Texas BBQ (including several recommendations), the artist he keeps returning to, and some of the scholars whom ordinary Christians would benefit from reading. Listen to our conversation here:

Here are links to a number of items we talked about:

This year, Brazos Fellows is partnering with Pinewood Pub on a series called “Tipsy Orthodoxy.” It’s a simple premise: in-depth theological discussion, in public, while drinking good beer. So far the series has been quite a bit of fun, with conversations on theological readings of Leviticus, Bonaventure’s arguments from ideas about God, and, most recently, our own Fr. Nicholas Krause on Augustine’s political theology.

We’re excited to announce that the next Tipsy Orthodoxy will feature philosophy professor Tom Ward presenting “Oh Taste and See that the Lord is Good: On Beer and Beatitude.” Here’s what we’ll discuss with Dr. Ward:

If that sounds interesting, we invite you out to Pinewood on Tuesday, Feb. 18 from 7:00-8:30pm. If you can’t join, the good news is you can get a window into Dr. Ward’s work on this episode of Five Questions in Ten Minutes.

Fr. Lee Nelson, rector of Christ Church Waco, writes on “The Lost Art of Catechesis” over at Crossway:

I have spent the last six years planting Christ Church, a parish church in Waco, Texas. Around the time I began this work, the draft of To Be a Christian was released. At the urging of our launch team, I began to teach it, going question by question through the whole. It was an exciting time! For me, it was as if the blood was rushing back into my veins as I read questions and asked the people to respond with the answer before explaining the meaning of each answer more closely. Metaphors, analogies, and anecdotes flooded into my mind and the people in that initial group responded with questions which never ceased to probe into the depths of Christian teaching. Within a few months, a group of twenty-five had expanded to over fifty. And within a year, our congregation was over a hundred strong. The joy of retreating back to the basics of the faith, and doing so in a leisurely manner, without a set agenda, and without cheesy, off-the-shelf curricula gave life to us. People immediately started putting the teaching into practice, especially as we asked each week: “How is this going to matter tomorrow?” A group of college students began to pray morning prayer together. They’ve been doing so for nearly five years. As our people learned about healing, we began to pray intently for the healing of our members. People have been healed. We not only gained strength in practice, but our cohesion in matters of teaching was amplified. Many found that they simply could not buy in, and they have found another church to join. Many found that they became enthusiastic in ways they couldn’t have predicted. And others found themselves renewed in the faith that they had received as children and young adults.

It’s worth reading the whole thing–especially if you’d like to get a sense of how Brazos Fellows grew out of a church-wide culture of study and prayer. You can also listen to the episode of “5 in 10” in which Fr. Lee discusses his love for catechesis here. 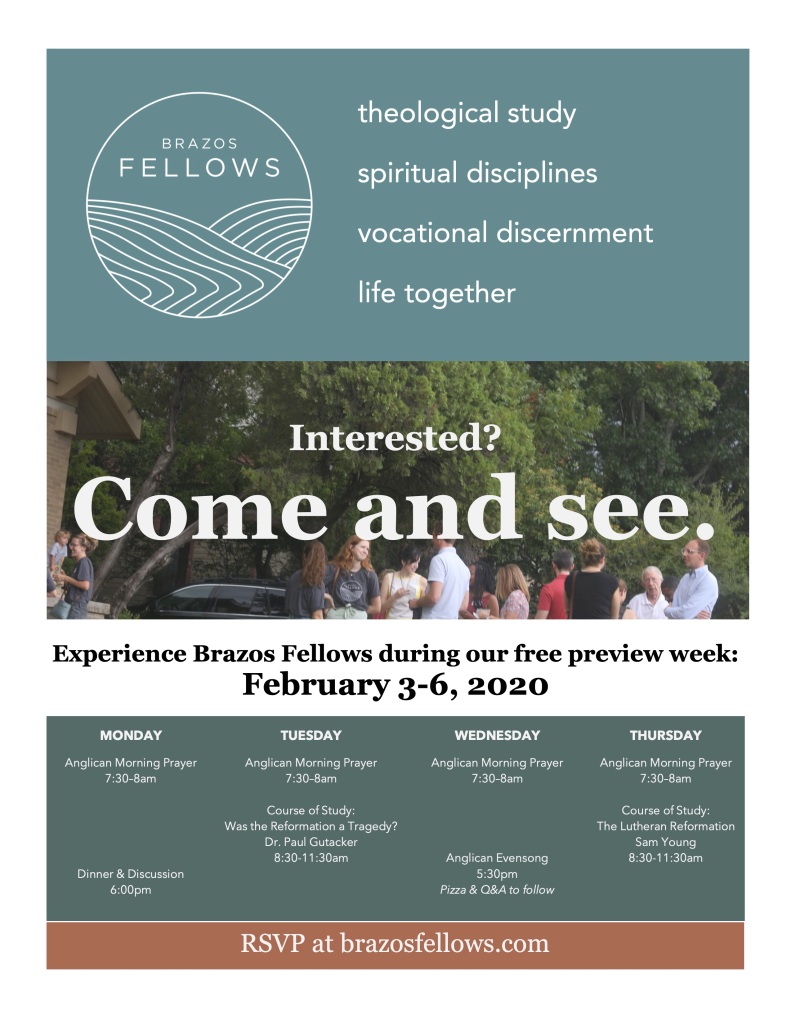 This morning the Brazos Fellows wrapped up our unit on Christianity and the image–and, what’s more, our fall term–with a conversation on icons with Dr. Natalie Carnes. Dr. Carnes is Assistant Professor of Theology at Baylor, and a constructive theologian who writes on Christology, patristic theology, theological aesthetics, images, children and childhood, and much more. The fellows and Dr. Carnes had a great discussion about the history of Christian arguments over icons and the various questions raised by images: can matter convey the reality of God? What does the incarnation change in what is possible with images? What are right uses of image in worship, and when do we need to be iconoclastic? It was a great end to our semester of study.